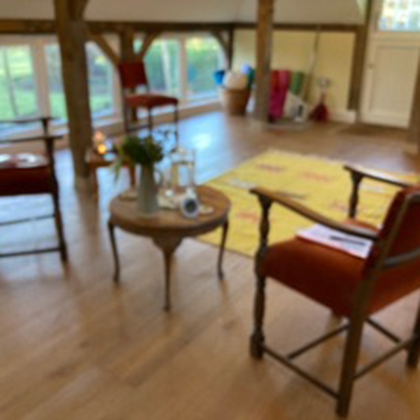 I am a Reiki Master & Teacher (Usui) and give Attunements to Levels I, II, and Reiki Master Level lll for those who wish to teach or further their knowledge.

These Attunements are held during a day at our studio ‘The Sanctuary’ in Dorking, Surrey. They are carried out on a one to one, or one to two basis.

They are then invited to join ongoing and regular healing practice sessions at ‘The Sanctuary’, included in the cost of the Attunement.

Those who receive Reiki attunements at any level are invited to join regular Reiki shares at ‘The Sanctuary’.

Held at ‘The Sanctuary’ in person.

These sessions can also be conducted via FaceTime or WhatsApp video call. I have spent lockdown volunteering successfully with Macmillan in this way, by seeing many patients on a regular basis, to offer relaxation, guided meditation and healing – a necessity following the temporary closure of the Centre owing to Covid.

I offer sessions for up to an hour to include Body Mirror Healing, Reiki Healing and a Wisdom Card Reading for £60.00. The Body Mirror System was developed by Sir Martin Brofman PhD, a former Wall Street computer expert and student of comparative religion, through his experiences of releasing himself of a terminal illness (inoperable cancer of the spine), which traditional medicine had considered hopeless and untreatable. He returned to perfect health.

He describes the importance of releasing the stress which causes symptoms by bringing harmony to the parts of your life that haven’t been working well, in order to release those symptoms.

The Body Mirror System can provide the means of identifying the specific tensions creating the particular symptoms, in relation to the chakras, as well as the tools designed to release these symptoms.

No physical manipulation is involved, only a light touch, if any, when it doesn’t conflict with someone’s philosophies or sensitivities.

Appointments are approximately one hour at ‘The Sanctuary’, Dorking, and can be taken either sitting in a chair or lying on a treatment couch.

Cost £60 to include a Wisdom Card Reading.
Cost for 3 sessions booked in advance is £170.

For more information about The Body Mirror System, visit www.fondation-brofman.org.
Martin Brofman also wrote a book called ‘Anything Can Be Healed’ (published by Findhorn Press).

To view all current classes, times and locations, click the class button below or get in contact to arrange individual tuition

Heather has been giving me Reiki for about 6 months, I have loved every session and I’m hooked!. I knew nothing about it before I first tried when it was offered by MacMillan Redhill as I was recovering from Cancer. I wish I could understand, let alone explain how she does it, but the reality is that I feel re-balanced, re-energised, extremely peaceful, re-centred and at the risk of sounding corny, I actually feel loved.

As well as being a great Reiki practitioner, she is a delightful human being, she is both able to concentrate on me very deeply but also lighten up and joke when it is appropriate. For Christmas I booked her to come to our home and give Reiki to my husband and to 2 of our children who are now young adults, and they have all felt the same. I was specifically impressed by Heather’s ability to deal with our son who, being on the spectrum, was rather reluctant to try something new. He came out saying he’d like to have another session!

From my first session with Heather, I have felt the benefits of Reiki healing. I was in terrible pain - both emotional and physical and it seemed as though Heather was able to pinpoint exactly where to unblock and release the negative emotions trapped in my body. From not being able to walk very easily, and in tears most days, I can now honestly say that my life has taken on a new chapter. Coupled with Heather's guided meditation, Reiki healing has played an enormous part in this recovery.